Chinese phone manufacturers have revamped their strategies and are focusing more on building the brand and future scale ups. Chinese manufacturers seem to have learnt the hard way after suffering severe blows for the low standards they set in the Smartphone market. OPPO after their success with the Find5 released N1 in November last year. Oppo has been garnering huge publicity thanks to the innovativeness with which the product is being marketed.

OPPO N1 is something beyond the regular dose of Smartphones. OPPO will definitely please many with its innovative touch via the O touch and the Swivel camera. Performance is snappy if not lightning fast. 13 Megapixel snapper is extremely refined and is a boon especially during those Skype calls and unending crazy selfies.

The device feels oversized and struggles to fit into your pocket and even if it does you start feeling uncomfortable once you sit. N1 doesn’t come with a micro SD slot stealing away the option of storing tons of movies and files in your phone. Missing LTE at this price tag can be a deal breaker for some.

OPPO N1has been propelled by the very fact that it has impeccable aesthetics along with a neatly designed body. The phone is gigantic when held in hands owing to the 5.9 inch screen size and the 6.3 inch in length. The build is extremely solid with the bezel encapsulating the screen. The metallic housing of the N1 is crafted with fine lines and precision machining. The cleverly hinged camera unit can be swiveled and voila it can be used as a secondary camera. This is a clear indicator that OPPO wants to seek attention in the sheepish smartphone crowd. Volume rocker and power buttons find a place in the right side of the device. The buttons are tiny yet serve the purpose effectively. Overall build of the OPPO screams quality. The region under the OPPO logo on the rear panel is a touch pad called ‘O-Touch’ which lets the user navigate through the screens and also perform the desired touch operation. OPPO touch is placed at the wrong place and results in accidental presses when kept in pocket and even when user is holding the device to watch movies. 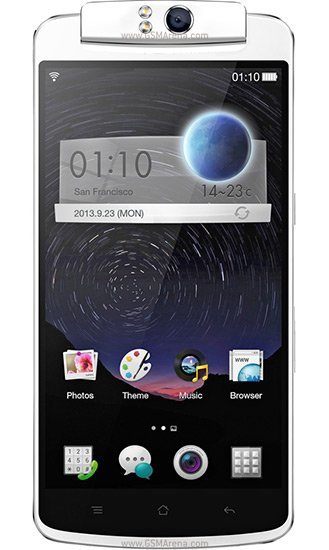 OPPO N1 has been endowed with a 5.9 inch screen which is neatly incorporated in the bezel. Viewing angles are great and the 1080 x 1920 pixel screen results in a commendable 373 pixel per inch. Screen is bright clear and lucid. OPPO N1 is perfect for movie buffs and serious gamers as the big screen notches up the experience. The Screen is less reflective and clear in the sunlight. Color shifting is minimal at any given angle(It includes those incredibly awkward ones). The screen is less reflective and maintains a high level of visibility in Sunlight.

OPPO N1 is propelled bya Quad Core Qualcomm Snapdragon 600 processor. The processor is fast although it’s clocked at lesser speed. The device performs smoothly without any lags. Multitasking is a breeze thanks to the highly optimized Android from OPPO.

OPPO N1 has got a neatly crafted swivel camera which is hinged at either ends. The camera unit can be flipped and used as a secondary snapper. The swivel camera unit is fatigue tested for  1000000 cycles which means even if N1 swiveling camera unit will last for at least 10 years even in the hands of a crazy person who rotates the camera for at least 40 times a day! Additional advantage of the camera is that it can be set at any angle within a range of 260 degree. This means that you can capture an air show or a tall building by just adjusting the camera unit at the desired angle.

OPPO N1 is definitely a notch above its Chinese competitors. N1 is built beautifully and everything about it is premium. It’s to be noted that OPPO is not a new company but it has already attained cult status when it comes to Blu Ray disc and other audio/video products. N1 is so huge that it becomes a task to manage the phone. OPPO N1 will foray into Indian market from first week of February. It will be interesting to see if N1 will set the charts on fire or will be a blooper in the Indian smartphone market.

How To Buy And Sell Online?